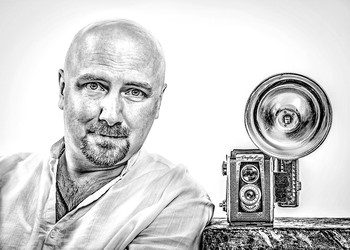 He was the sole contributing photographer for the highly acclaimed Konxari Cards, a popular paranormal card supplement. The 88-card deck will see some television air time in 2013. The cards were positively reviewed by the popular Rue Morgue Magazine and will be showcased in a Canadian production called The Other Side. The paranormal team featured on the show will utilize the cards on screen during their investigations.

In April 2009, Kane released his first book of photography entitled Captured: The Ruins of Eastern State Penitentiary. Kane not only contributed the images, but also designed the book and recorded an audio commentary to go along with the images.

Kane’s work is also featured in the July 2009 collaborative project, The White Album. The book, a visual tribute to The Beatles, showcases artwork inspired by songs and lyrics from the Fab Four. Kane’s contributions are the only photographic work featured in the book – among traditional artistic media. The book debuted to great success at ComicCon International, the biggest multimedia event of the year.

In 2010, The Lakota Wolves folio came out and features - for the first time - Kane’s wildlife work. Kane photographed more than 2 dozen wolves for the book.

Early 2011, Kane was asked to photograph the 1799 Lazaretto, a vital historic location just north of the Philadelphia International Airport.

Another publication that used Kane's work in 2011 was Reconnecting with David Allen Brown. Kane was commissioned for several environmental portraits of the renown psychic medium and contributed many other pieces to the book.

In summer of 2011, the Special Vehicles Team Owners Assoaction published Ford GT: The Complete Owners Experience. The book featured a wrap-around cover by Kane and over 50 interior images shot specifically for the book. Sold out of it’s first printing, the book is now in it’s second edition. The Tonight Show's host, Jay Leno, can be seen interviewing the book's authors here.

Kane is often quoted as saying that 'the best camera you have is the one you have with you.' With that in mind, Kane published Cellular Images in 2012 - a free e-book showcasing some of his iPhone photography. This interactive book has been downloaded nearly 12,000 times and allows readers to click on apps mentioned in the copy of the book.

2013 saw Kane's work featured in not one, but two, issues of the wildly successful, local New Jersey magazine, Weird NJ. Kane also went on to design and contriubute images to the popular Garden State publisher's first foray into eBook with the release of Home State Hauntings: True Stories of Ghostly Places in New Jersey. Kane is especially proud of the cover design of the best-selling ebook as it features the appearance of his daughter, Peyton.

Kane's work was also featured on the cover to American Movie Palaces. The image featured is his award winning photograph of the Byrd Theater, located in Richmond Virginia.

Additionally, his design work has graced the covers of several popular novels as well as a 30th anniversary Star Wars Poster. Kane’s writing has appeared in such publications as Art Scene International and The International Writers Open Forum.

Kane draws his inspiration from multiple sources, from past mentors to new and upcoming talent. He has a tremendous web presence, taking advantage of many social networking sites, such as Facebook and Twitter

Well respected as a proficient graphic designer and photographer, Kane has given lectures on both visual communication and fine art photography across the United States.

He is the very proud father of Peyton Marie, and blessed husband of over 15 years to his wife Heather Lyn. The happy family resides in the beautiful, and very photogenic, mountains of Northern New Jersey.
© Paul Michael Kane Photography
Powered by ZENFOLIO User Agreement
Cancel
Continue